Can it really be autumn?

by anna @ dashdrizzledollopdevour on September 18, 2013 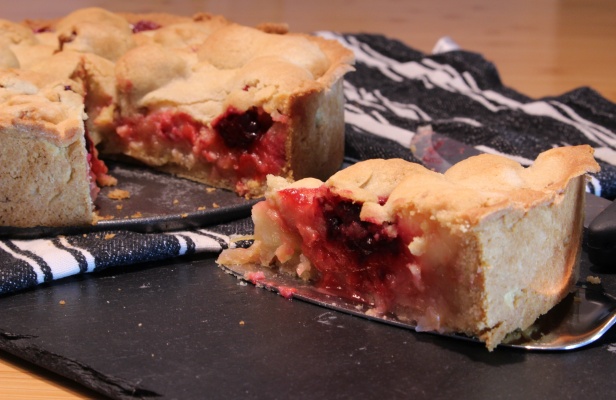 There have been definite signs of autumn this week: 1. I’ve had the heating on in the last couple of evenings. 2. My opaque tights have been on a couple of outings. 3. There is a crumble in the oven.

Maybe its time to let go of summer after all. Baking a crumble seems like a definitive acknowledgement of autumn.Whilst I am still trying to deny it, to stretch out the last of the long warm days, my food preferences do change perceptibly with the change of seasons, so my stomach is in autumn even if my head isn’t. Although I do enjoy the rhythm of changing cooking with the seasons. The allure of a crisp cool salad slowly wanes in September, to be replaced with a longing for warm spices, squashes roasting in the oven, mushrooms and chestnuts, thick soups and crumbles, all soothing as the nights draw in.

The shops are full of ripe English plums. I was hoping for some blackberries too, but I couldn’t get hold of a punnet. But I bolstered the plums with a few apples I still have from the PYO session. I like a rich buttery crumble, with crunchy golden nuggets on the top and a lovely soft squidgy layer underneath where it has soaked up the juice from the fruit. I use about 100g butter and 150g flour for a crumble that would probably serve 4 (with custard, naturally!). Rub the butter into the flour. It helps if you chop the butter up a bit first. Rub it in until you have a breadcrumb like consistency, but don’t worry too much about getting rid of every last lump of butter. To this mix I added 2-3 tbsp of ground almonds, mostly because that was what I had in my cupboard. Oats would also undoubtedly be nice. Finally add 2-3 tbsp light brown sugar.

Peel and roughly chop some apples – I had a mix of bramley and eating apples, I used about 2 of each, they weren’t particularly big ones though. Then half and de-stone some plums, 8-10 nice English Victoria plums in my case. Scatter these into an overproof dish (mine is 15x20cm) and spoon over a couple of spoons of sugar. To up the almondiness I splashed over some amaretto liquor and then finely sliced a couple of balls of stem ginger and scattered that on the top too. I wanted to notice the pieces of ginger but not have  big lumps which might result in the occasional fiery mouthful.

Scatter over most of the crumble mixture, reserving a few spoonfuls. This is my favourite crumble trick. Sprinkle a little water over the reserved crumble mix and clump it together with your fingers to form small lumps. Scatter these over the top of the crumble – they bake into nice crispy nuggets and add an extra dimension to the crumble.

Bake on 160C for half an hour or so until the top is golden and the fruit is bubbling away.

I have some leftover pork belly in the fridge, along with half a tin of tomatoes, so the obvious choice to me is to make a slow cooked casserole.  The joy of pork belly comes when it is cooked long and slow, so the meat is falling apart. I started by slow cooking 3 slices of pork belly  – about 300-350g – wrapped in foil and cooked in the oven on a low heat, 150C fan, for about 1.5 hours. In the meantime I made the base of the casserole, using a small onion, finely chopped and 3 cloves of garlic, also finely chopped. Sweat these in some olive oil, over a medium heat, adding salt at the same time, to draw out some of the moisture which helps prevent them catching. Then add sliced chorizo (about 75g) and stir this around for a couple of minutes. Once softened add some spices – about a tablespoon of cumin seeds, roughly ground, 1tsp paprika and ½ tsp smoked paprika. I wanted warming spices rather than heat , although some chilli would work well in this dish too. I add a splash of port (in lieu of red wine, I’m not up for opening a bottle for this) then 1.5 tins of chopped tomatoes plus half a tin of water. I leave this to simmer away for about half an hour, before adding a tin of black beans into the mix. Once the pork is cooked I cut it into bite sized pieces, it nearly falls apart, and add it in to the mix and simmer again for 10-15 mins to allow the flavours to begin to meld together. This made about 3 portions. I am rubbish at cooking the right quantity for 2, but at least it means that Monday supper is sorted.

We have this on its own, safe in the knowledge that there is a crumble in the oven for pudding. It would undoubtedly work well with rice and go further too. A splodge of something cool, sour cream or similar, would be nice too.

I am inspired by Ottolenghi here, he has such a lovely looking dish in his Jerusalem book, although I am unable to follow the recipe completely due to the restrictions of my larder. So what I end up with is more inspired by, an interpretation of. I have one medium sized butternut squash for the two of us, which I peel, deseed and chop into chunks. 1 large red onion goes the same way. I toss them both together in a little olive oil, salt and pepper and then roast at 200C for half an hour until the edges are catching brown and they are soft and cooked through. Meanwhile make a little dressing from a couple of tablespoons of tahini, the juice of half a lemon, 2 tbsp water and 1 crushed clove of garlic. Whisk together until smooth. Toast a handful of pine nuts in a dry pan, being careful not to let them catch, such is their want. Then sprinkle over some toasted spices at the end. I made a nice little blend of black pepper, cinnamon, cumin and allspice, roughly ground together.

Apples and blackberries. Blackberries and apples. Ever since I discovered Nigel’s apple shortcake, I’ve stopped using a shortcrust pastry and changed to making a shortcake type base instead. Its much easier, always crisp on the outside and soft within, buttery, never collapsing, amazing. I can’t say I’ve completely mastered rolling out pastry and lining a tin, regardless of the recipe. Its lifting it up once I’ve rolled it that I fail at most of the time. But this is forgiving and easy to patch should the need arise. It turned out I was running low on butter, so I used 125g butter and sugar, briefly creamed together before adding 220g flour and 1 egg. This comes together into a soft dough. Use about 2/3 to line the base of a 20cm loose bottomed tin and chill for half an hour. Tumble in roughly peeled and chopped apples. Again I am using a mix of bramley and eating. I do think you need some bramley,  its these that cook down into apple sauce with the eating apples giving some texture. I used 3 mid-sized bramleys and  6 smallish eating apples. Sprinkle over 1 punnet blackberries (about 150g) and then roll out the remaining 1/3 pastry and lay gently over the top. Press around the edges to seal and then bake at 170C for about 30 mins till golden. If you prefer a nice shiny pie then brush with beaten egg before baking.