by anna @ dashdrizzledollopdevour on February 16, 2015 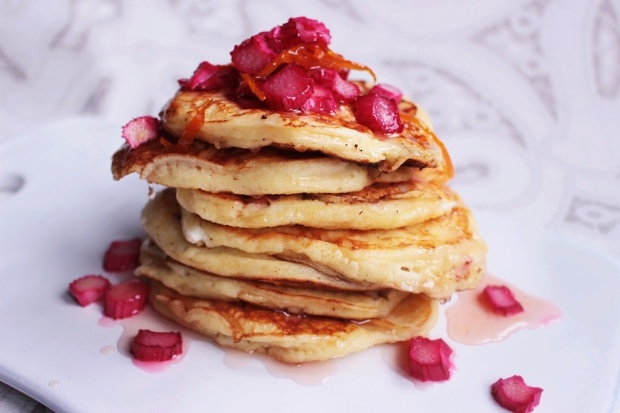 I’ve been eagerly awaiting the new season crop of forced pink Yorkshire rhubarb since Christmas. I find it totally irresistible – both the colour and flavour are just exquisite, providing me with a month or so of beautiful blushing pink puddings.

Rhubarb’s intense sourness needs countering with plenty of sugar to draw out its fruitiness. Ever since I was a child, I’ve loved dropping chunks of raw rhubarb into granular white sugar to make a sherbety treat; sour and citric and crunchy and sweet all at once. The sharpness of rhubarb means it is delicious paired with something sweet and creamy, so these cheesecake pancakes are the perfect accompaniment. I wanted to make a pancake that had all the rich flavour of a cheesecake, with some definite nuggets of cheese, but which is still light enough to be able to eat a few! So I used a combination of both ricotta and cottage cheeses for the base, with some lightly whisked egg whites folded in to give a nice fluffy texture. 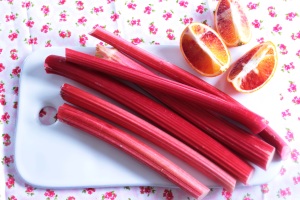 Start by preparing the rhubarb topping. I decided to roast the rhubarb to keep the shape of the slices in tact and intensify the colour even more. Preheat your oven to 200C fan. Slice around 3 stalks of pink forced rhubarb into thin slices, around o.5cm. Scatter these over a baking tray in a single layer and sprinkle over a couple of tablespoons of caster sugar. Bake in the oven for just 5 minutes, until just tender but holding their shape. Allow to cool.

Pancakes need syrup! I like the flavour of oranges with rhubarb and if you can get hold of blood oranges then so much the better, as the colour works well too! Pare the zest from 1 orange – I tend to do this by taking slivers off with my vegetable peeler then slicing them into fine strips. Squeeze the juice of half an orange then top up with water to measure 1/2 cup of liquid. Place in a pan with 1/2 cup of caster sugar and the zest. Warm over a low heat until the sugar has dissolved, then simmer until reduced by around half and thickened slightly. Set aside whilst you make the pancakes. 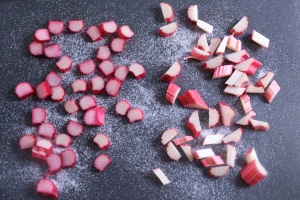 Mix together 1/2 cup ricotta cheese, 1/2 cup cottage cheese, 1/4 cup milk, 2 tsp caster sugar and 2 egg yolks in a large bowl. Then add 1/2 cup of plain flour, 1/2 tsp baking powder and a pinch of salt. Stir to combine. Finally, in a separate bowl whisk the two egg whites until thick and frothy, although no need to turn them into meringue-like peaks. Fold gently into the rest of the mixture with a metal spoon.

Heat a good knob of butter in a large frying pan and cook heaped tablespoonfuls of the mixture over a medium to low heat for about 2 minutes per side. The pancakes are ready to turn when bubbles have formed and set on the top side of the pancake.

Tumble the roast rhubarb over the stack of pancakes and then drizzle with the orange syrup. I made 8 pancakes from this quantity of batter which is plenty for 2.

1/2 cup plus around 3 tbsp caster sugar