by anna @ dashdrizzledollopdevour on December 9, 2013 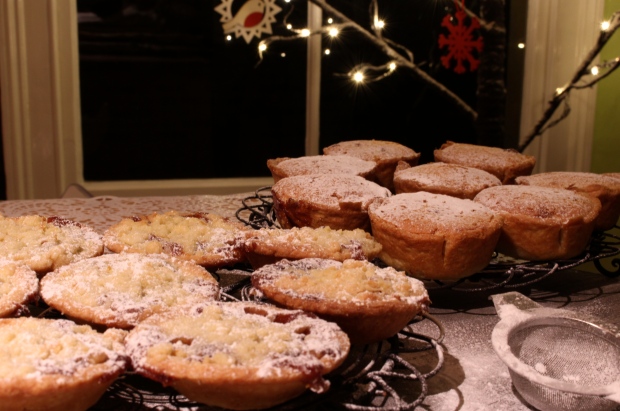 I’ve never made my own mincemeat. Whilst apparently super straight forward, it always feels like one step too far when you have a million and one other things to do in December. Yet that doesn’t stop me tinkering a little bit with the shop-bought stuff, which in my book makes it pretty much as good as home made. The combination of cranberry and orange flavours enhances any jar of mincemeat beautifully and I must say I feel pretty pleased with myself about this little invention.

I made two types of pie as I was feeling indecisive. The pies were for a work bake-off and couldn’t decide whether to go for a sweet, moist almond frangipane topping or an orange crumble topping, so in the end I made both. This recipe therefore makes 24 pies, but is easily halved.

Start off by making the pastry as it needs a while to rest in the fridge before baking. I was feeling lazy, so out came my food processor, although normally I just make pastry by hand. Tip 150g flour and 75g butter into the bowl and whizz until you have a fine crumble. Then add 30g caster sugar, 50g ground almonds, 1 egg yolk (save the white for later) and 65g cream cheese. Blend again then add the juice of half a clementine. Pulse a couple of times and if it is just starting to come together then stop, otherwise add the juice of the other half clementine. Gently form into a thick disk, wrap in cling film and rest in the fridge for at least 1 hour.

Then start your turbo-charged mincemeat. Start by putting 75g of dried cranberries into a small pan and cover with 75ml of port. Bring to the briefest of simmers, then turn off the heat and leave to cool. The cranberries should slowly soak up most of the port, becoming plump and juicy.

Meanwhile, spoon a 400g jar of mincemeat into a mixing bowl and stir in about 170g good quality fine shred marmalade. The bitterness of the marmalade really cuts through the sweetness of the mincemeat and adds a good orangey flavour. Stir through the cooled cranberries with any residual port and a good slosh of brandy.

Once your pastry has chilled, roll it out thinly on a floured surface, cut out circles (I just use a glass, having dusted some flour on the rim) and line your tins. I used a muffin tin for the frangipane ones, so they would be quite deep and a shallower bun tin for the crumble ones. You should have enough pastry to line all 24, although it might need a re-roll from time to time. Pop the tins back in the fridge whilst you get on with the toppings and preheat the oven to 160C.

I’ve never really been a fan of mince pies with a full pastry lid.  For me, the star of the show is the mincemeat, so I like to cut down on the amount of pastry used on top. Sometimes I get my collection of pastry cutters out and cut little star shapes for the lids, other times I leave pastry out of the topping completely and opt for something completely different. This was one of those days. Neither of these toppings is time consuming or complicated though, so I don’t think it is much more work than if you used a pastry lid.

Start with the almond frangipane. In the food processor again (unwashed, its all similar enough!) add 50g softened butter, 50g caster sugar, 75g ground almonds, 1 egg and the egg white reserved from earlier and 1tbsp flour. Blitz together, then add a splash of amaretto, if you have any, and pulse to combine.

For the orange crumble, again in the food processor, pulse together 75g cold butter and flour, then add a couple of tablespoons each of ground almonds and caster sugar with the zest of 1 clementine. Add a good spritz of juice and the clump it together with your fingertips so you have a coarse lumpy mixture.

Now for assembly. To save on washing up I assembled the frangipane pies first, as they were bigger, and got them going in the oven whilst I made the crumble topping, then assembled the crumble batch and put them in 5 mins or so later.

Split the mincemeat mixture between your pastry cases. I would nearly fill the shallower, crumble topped ones and half fill the frangipane ones. The filling will bubble up a bit when cooking, so you don’t want them completely filled to the brim or you will just end up with a sticky mess all over your oven. When adding the frangipane topping, try hard to completely seal the mincemeat below to avoid it escaping. Heap the crumble on top of the smaller pies, without worrying about any gaps.

Bake for around 20minutes, until golden brown. If you have any mincemeat spillage, try to scrape it up with a knife before it cools otherwise it will glue your pies to the tin. I tend to let the pies cool slightly in the tin before taking them out though as it just allows the pastry to firm up and become less fragile. Once slightly cooled, remove from the tin and allow to cool completely on a rack before dusting with icing sugar and edible glitter if that’s your thing – it is mine!